11 December 2016 By Maciek No comments yet szwajcaria

In a crowded room one can hear a voice asking repeatedly ‘Who gives more? We have a current bid of 5.8 million, going once. Going twice. Then, the sound of a hammer fills the room. Sold! „The Blue Rigi” painted by JMW Turner becomes a part of Tate Britain collection.

Apart from The Red Rigi and The Dark Rigi, the collection of the British gallery has been enriched by the blue watercolour painting for which they paid a record sum. It represents a beloved mountain of Turner who devoted over 30 canvas to that motif. Three of them are perceived as masterpieces of Impressionism. It’s ironic that Turner didn’t reach the summit. He probably missed or maybe he didn’t want to experience the spectacular view that attracts tourists for so many years. Yes, the panorama from the top of Rigi is a legend. Immense popularity of this massif has been growing since the Victorian era. Queen Victoria as well as Wagner spent there some nights.

At the beginning of the 19th century, as a result of growing popularity of the mountain the first cogwheel train to the top was built in 1846. It was only during the first year of its activity when over 130 thousand tourists took their ride to the peak (1 797 metres above the sea level). Rigi was awarded with the title of Queen of the Mountains not only because of the peaceful panorama but also because of some trivial reasons. All trails from Goldau and Vitznau are walking ones. That’s why the summits, for instance, Eiger or Matterhorn were supposed to be classified as the ones less accessible.

From Zürich we took a train to Goldau, where we had to change in Rigi Bahn, in order to reach Rigi. We have to confess openly that the style of our trip resembled a stroll of old pensioners. Well, well… a childish desire to take a cogwheel train ride was much stronger and restrained all great ambitions. One would say that a sense of tremendous fun is worth it. For those of you who are also likely to succumb to this particular temptation, we have to give a piece of advice. Remember while going up, sit on the right side since only those places can guarantee the views.

The last station in Rigi Bahn is so magnificent. Finally, we reached the peak. The view from Rigi was hypnotising. Somewhere far away snow-capped summits were visible, whereas beneath our feet we could admire green meadows packed with flowers. The weather was glorious for tourists – clear sky and light wind. And it was just the beginning of the trip.

Moving a little bit further, next to a tower which is exactly at the top. In front of us we could see Mount Pilatus which is overlooking Lucerne and also Lake Lucerne. Tiny sailing boats were drifting across the lake surface, the sound of cowbells was coming from a remote place and above the transmission tower were paragliders. If we could say that we had been dreaming about the perfect moment and scenery, we had it and the feeling of euphoria was distinct.  One would say “Pinch me!”

We succumbed temptation to lie among those flowers and to take some pictures. Pink and yellow meadow was alluring.

At the top we also had a break to eat something since we had left home without breakfast. Lunch with an alpine view – unforgettable. Prices in a mountain hut/hotel were typical of Switzerland (20 CHF for a main course is more or less the Swiss standard). The hotel itself has been modernised and as a result it doesn’t have its unique atmosphere any more. That’s why it seems to be the only thing which completely doesn’t fit here and moreover it spoils a little bit the landscape.

From the peak we headed down to Goldau. It was our first hiking trip in Switzerland during which we discovered, to our astonishment, that all trails were marked red on the map. It is possible to distinguish only two types of trails – mountain and walking ones.  Those mountain footpaths require to be physically fit and to have proper shoes, whereas the second kind of a path requires completely nothing. Maps and waymarks leave a lot to be desired, especially when you are at a crossroads and a decision, which trail to take (one of five other ones), should be made. Well, one can get used to it or download a map  (Switzerlan Mobility App).

However, the views compensate for any inconvenience caused by navigation problems. No matter where we went, almost everywhere on the trail we encountered some herds of happy cows with their cowbells. Small huts were scattered around the valley and white paths and tracks were crossing meadows. We made a circle around the valley in its south – west part, passing it along a boarder of two cantons (Schwyz and Lucerne).

Suddenly, the walking path was transformed into the mountain one and its flat surface started to resemble a rocky trail that led us down to some pastures. We had no choice but to open the gate that protected the cows. After covering around one kilometre, we still couldn’t find any signs and what was more, there weren’t any tourists so the feeling of surprise and uncertainty was becoming greater and greater. It seemed that even heifers could have been astonished since no one dared disturbed them. Passing through the first and then the next pasture we knew that several pairs of black cows’ eyes were observing us.

In the middle of an enormous meadow, which was placed on the rock, our path simply disappeared. It took us some time to find a trail or rather the right direction where to go. In spite of a two-hour walk, we were still very high. Goldau seen from the verge of the meadow seemed to be utterly remote. However, the view of Rigi Kulm and two peaks of Mythen towering over Schwyz was fantastic.

The real trail began just behind a gate when suddenly the grassy field changed into a steep wild and slippery path. It seemed that almost nobody had been there before. From time to time some shoeprints could be found – maybe somebody was there even that day. Obviously, one could hardly notice any waymarks in comparison to several places where the reflection on the direction was necessary in order to choose the proper way.

After taking the next turning we found a high waterfall from which streams of water were hitting a massive rock as if it had been a shower. We took a short break in order to rest just a little bit and to take some pictures. Later on, our steep path was zigzagging down and finally we reached another meadow. The view of a road and some buildings instilled hope in us. Once again, after around two kilometres, we reached a pasture on which some cows and goats were grazing.

We weren’t extremely glad that we got to Goldau since it was the end of our adventures. The only thing that left was to catch a train to Zürich and allow our legs to relax. None of the benches at the railway station were so comfortable! 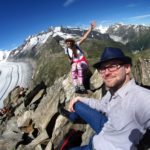 Zürich – the city of delight and great pleasure